Santarém, top table seat in Portugal for the IOC 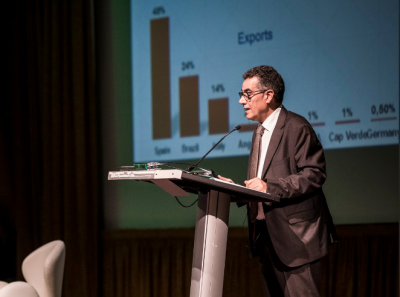 The Executive Director of the IOC, Abdellatif Ghedira, was given a top table seat at the first global summit on olive oil in Portugal, as part of the National Agriculture Fair in Santarém. Ghedira opened the international symposium with a presentation on the development of the world olive oil market, taking the floor immediately after the inaugural speech by the President of the Confederation of Farmers of Portugal, Eduardo Oliveira e Sousa.

This initiative included a series of activities, such as a national competition for Portuguese olive oils, a national symposium on olive growing and an international conference on olive oil, which sought to provide an opportunity for promotion, networking and the exchange of experience among operators across the olive sector. The global summit on olive oil was organised under the patronage of the President of the Republic of Portugal, and speakers included Phil Hogan, the European Commissioner for Agriculture and Rural Development, and the Commissioner for Research, Science and Innovation, Carlos Moedas.