The works of Matej Metlikovič - especially his shining stained glass windows, created in the medium of fused colored glass combined with a linear painting - are probably the most serious attempt at the moment to revive visual sacral art in Slovenia.

He considers the stained glass windows in the chapel of the Anton Martin Slomšek Maribor Institute, entitled The Tree of Life - The Tree of Love, as his central artwork, "summarizing everything backwards and forwards", as he described it during our conversation. 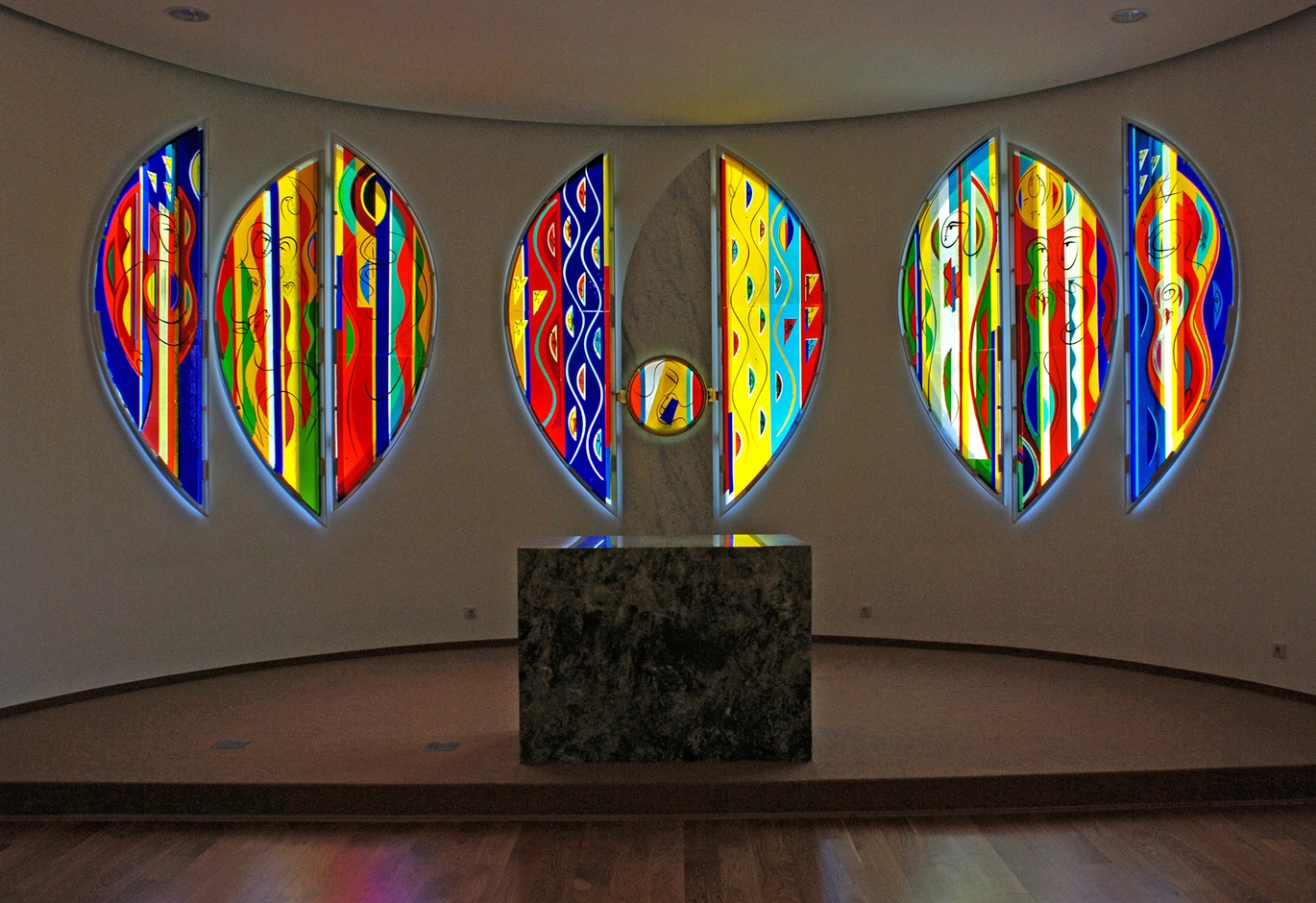 They were created in 2009-2011 and were theologically inspired by the encyclic of the pope Benedict XVI. Deus caritas est, which linked the concepts of agape, philia and eros. Benedict XVI returned to this very old theological debate with this idea: the relationship between agape and eros was devoted to Dionysius Areopagit in connection with the controversy of the Song of Songs at that time; he advocated the use of the word eros in theological treatises instead of the biblical word agape - with its (neo) Platonist meaning. The official Church rejected this tendency in the sixth century, and with the recognition of the theological significance of eros, the Benedict Encyclical reopened something that was closed at the time. This is also worth noting because, in the twelfth century, it was precisely the mystical theology of Dionysius the Areopagite that was crucial to the conceptual formation of the Gothic style with the special role of colorful stained glass windows. Thus, in a conceptual sense, Metlikovič, with his very inventive conception of fused glass church windows, which does not rely on the tradition of medieval technique of connecting colored glass pieces with lead profiles, is nevertheless in some sense connected with the medieval tradition. (It is no coincidence that he decided to move from abstraction to a "new image" after visiting Paris in 1980 - where he and his wife Teja went on a wedding trip - under the impression of a strong experience of medieval art there, especially the  magnificent stained glass church windows). However, the biblical Song of Songs was his initial inspiration at the Maribor stained glass windows. Its beginning is visualized by the motif of a kiss on the door of the chapel's tabernacle, and the stained glass windows grow around this central motif, which in the iconographic sense is probably unicum in this place.

Another complex work by Metlikovič is the large glasswork Spring of Grace, created for the underground chapel of the John the Baptist Home in Ljubljana-Trnovo; the round glasswork is positioned so that behind it there is a wall; natural light - which falls down from the the roof window to the presbytery and the whole chapel - illuminates it only indirectly; because of the unusual thickness of the glass it looks as a kind of glass sculpture or painting-sculpture. Because it's circular form it evokes an allusion to the Sun, which has entered the underground space and will rise again from it. 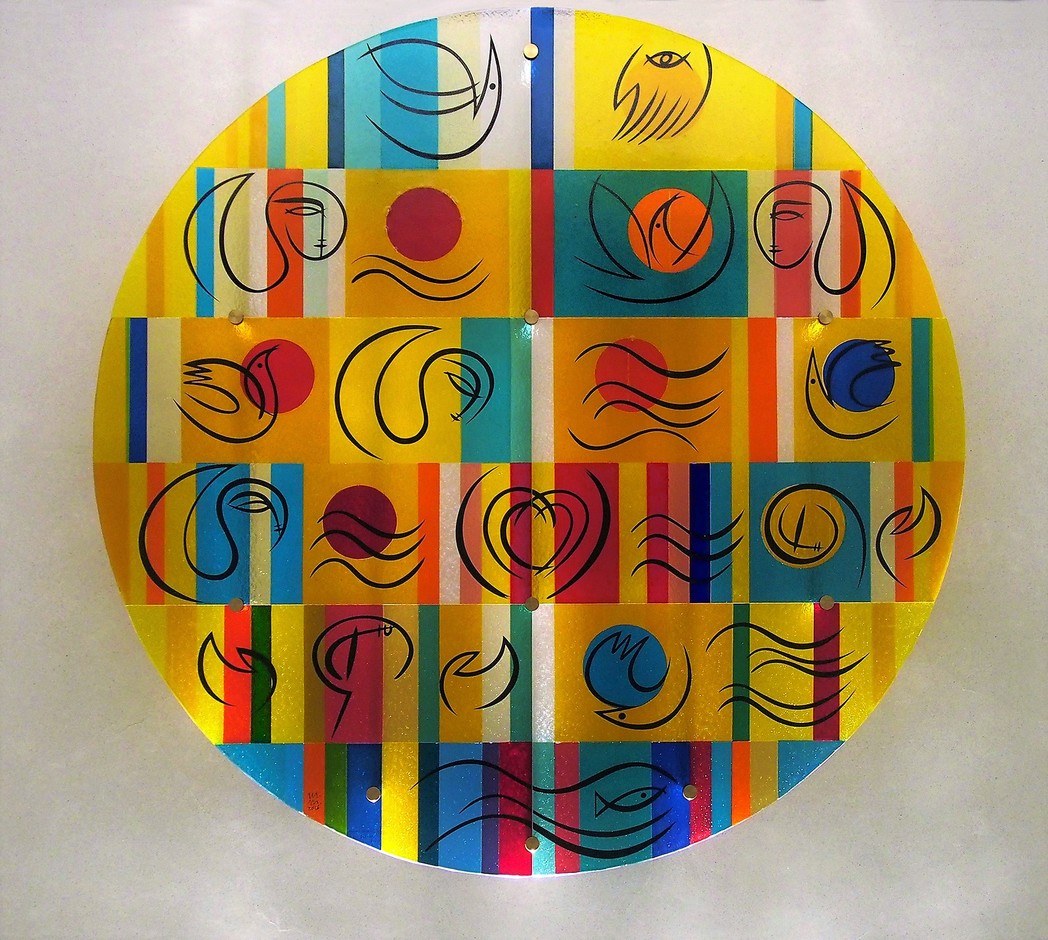 At the same time other works and cycles in acrylic technique are eruptively created in the painter's studio: the Angelic trilogy, the Dream Recordings, Icons of Love ... The last cycle is painted on wood - like many of his works - and expresses the artist's special love for Orthodox icons, which also marked/inspired his artistic development. 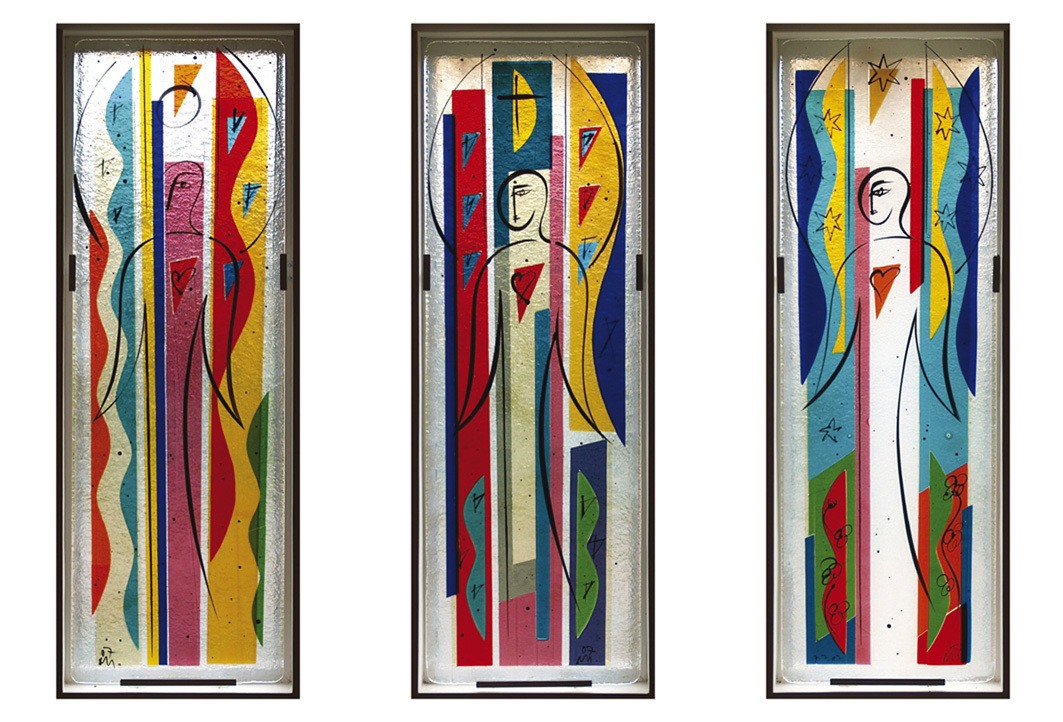 But Metlikovič's purest medium is definitely glass. It achieves the magical annealing of the colors of this glass with a special combination of transparency and density (again we could speak of some non-exclusive relationship between the spiritual and the material, the sacred and the secular); the windows of his stained glass are unusually thick, their materiality is emphasized, and from time to time we see air bubbles in them, which again add a new luminosity. The artist combines abstract compositions of color combinations with suggestive symbolic drawings. The artist himself compares the color compositions of these stained-glass windows with pure music, and the drawings that „fly“ over these colored compositions, with the lyrics of a song that is sung with instrumental musical background. With their focus on the essence, these drawings turn into some kind of ideograms that simultaneously evoke precision and openness of meaning. At times, they remind me of the Islamic calligraphic tradition - or how the moments of that tradition were conveyed by Paul Klee. Otherwise, I feel more of a French cultural tradition in Metlikovič, from Matisse and Le Corbusier to Rouault, which influenced in particular his neo-expressionist intonation of the 1980s.

"I see visual art in the sacral space as visualised music," says Metlikovič. And it is precisely this musicality that causes everything to be reduced to the essence, yet it has a luxurious effect. It's not just about the music, it's about the dance. The gesture of his drawing is dancing. And when presenting his works, Metlikovič on many occasions accompanies his works with a dance performance where dancers performed gracefull dance in sacral spaces.

Everything has a precise meaning, every colour, every line - but these meanings are not pre-fixed; precision is established in the viewing process. Metlikovič creates an open work that is handed to the viewer - and that is why he becomes the best observer of his works. Even when the work is completed, the creative process does not end there, but proceeds equally intensely forward with the discovery of ever-new connections and associations, which in turn redefine the semantic web of work more and more precisely.

The most wonderful thing that was revealed to me in the encounter with Matej Metkovič and his art is just how it is impossible to separate his works from the creative process - and how a work, when materialized, requires that this process continues with unchanged attention. Meeting Metlikovič's work is a great lesson in mindfulness.

There is no predetermined iconographic program, it is initially a premonition, a fundamental feeling - but that does not mean that this program does not exist – it is built as a constant awareness, as a fulfillment of that premonition with new experiences, connecting with new contents which are condensed into an extremely precise web of meanings, which continues to remain open to ever new connections. Therefore, the fundamental feeling of these works remains fluid throughout.

The meanings condensed in the work are related both to references that directly influenced its formation and to those links that were discovered only later. It was wonderful to see an artist in front of a stained glass window interpreting the impulses - from the fundamental iconography of the Baptism of Christ through Rûmî's verses in Philip Glass's composition Monsters of Grace. "While creating I felt the linear drawings on the stained glass image are like spirits, flying in and out of the window in the center of my chest“, he explained to me and quoted a verse by Rûmî. The heart of Jesus at the center of the composition he also connects with Prešeren's verse "A spark has fallen on my heart," speaking about the origin of the poet's greatest love, which occurred in the nearby church of Trnovo; thus, the stained glass also informs the specific genius loci of the place for which it was created, and this connection continues with an allusion to the rotunda from the nearby forum of the ancient Emona, the precursor of the city of Ljubljana. At the same time the author recognizes in the basic structure of the round glasswork a symbolic vision of the human soul from Srečko Kosovel's poem Kaleidoscope. A few days after our visit to the stained-glass window, he sent me a photo of a mountain waterfall in which he recognized a parallel to the vertical axis running down the middle of the stained-glass window, which he connects to Prešeren's epic poem The Baptism at the Savica Waterfall. The artist recognizes everything he meets as present in his own work - just as within himself he recognizes the simultaneous coexistence of different times. For example, in the geometric structure of the colored surfaces of the stained glass he recognizes the connection with his artistic beginnings, when he similarly structured abstract colored surfaces in the spirit of the 1970s painting in Slovenia (Tugo Sušnik and Tomo Podgornik). In doing so, he quotes Eliot's verses from the Four Quartets on the simultaneous existence of the present, past and future.

"All the symbols live in us, it all resonates," Metlikovič told me during our conversation. And in his work, all the impulses that shaped his sensibility come to life again: the poetry of St. John of the Cross, Monteverdi's Vespers of the Blessed Virgin Mary, but also pop culture that shaped the artist at a young age and continues to inspire him today: Pink Floyd, Leonard Cohen, Jimmy Hendrix, Bob Dylan... And again Messiaen, Marko Pogacnik's book on Venice, Byzantine mosaics and Eastern icons ... In doing so, the peripheral perceptions from everyday life penetrate into the works as equal elements, which the artist draws with equal attention; the circles, which are such an essential structural element of his latest works are said to have come from cardboard packaging boxes reduced to pieces on which he paints his miniature Dream Recordings.

The Spring of Grace, with its title, evokes an aquatic element, and in many segments of the stained glass window this element is also evoked by colours and linear symbols - but even this water is enclosed in the fiery figure of the sun. As if this stained glasswork would overcome the contrast between Christian baptism and Gnostic fire baptism. At the same time, we can recognize the evocation of the great traditional themes of the Center and the Axis.

The fundamental mode of existence of Metlikovic's art is solar. Metlikovich loves summer when the colors glow the most, and compares art to the biblical burning bush: "Good artwork burns but is not consumed by the flames“. 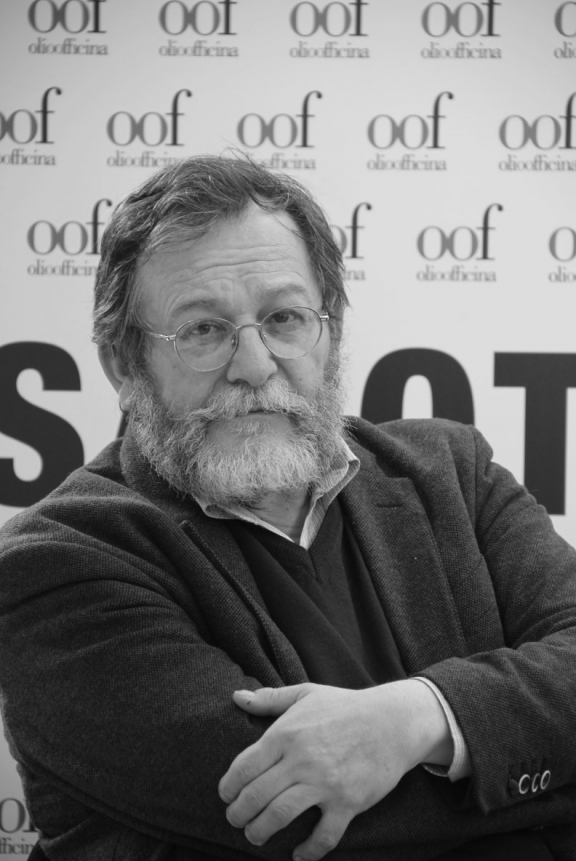